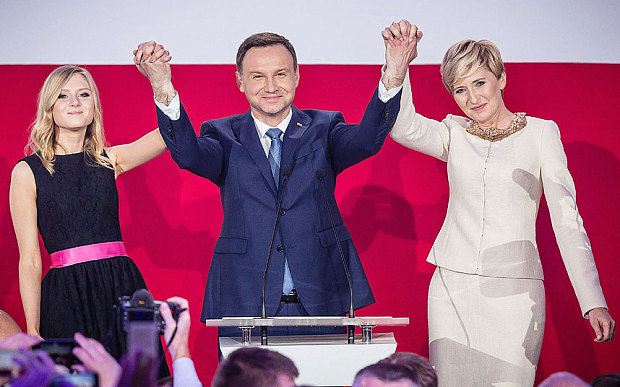 Polish presidential elections and Poland’s future in the EU

The final round of presidential elections took place on Sunday 24.04.2015, with the result of the current ruling president Bronislaw Komorowski losing to the Law and Justice Party’s (PIS) Andrzej Duda.

The victory of Duda’s Law and Justice Party is the latest in a series of electoral victories for center-right, right-wing parties in Europe. The party itself received strong support in the eastern half of the country ,near borders with Ukraine, and had campaigned successfully on a platform of tax cuts, continued privatization, constitutional reform, increased spending on military and closer ties to NATO and limited support for EU integration.

Duda’s party promotes soft Euro-Skepticism, from a nationalist conservative perspective they wish to increase cooperation with the EU, when it is in Poland’s favor, i.e. in the areas of economy, energy security and military. Yet in fear of EU becoming a super state and heading towards a federalist direction, the Law and Justice Party wish to minimize political cooperation with the EU.

What does this mean for Poland’s future as an EU member-state? Seeing that Poland’s second largest party in the parliament has a member in the presidential position, surely the political direction is going to change affecting the country’s international relations. This may change their position in the EU, seeing that the Law and Justice Party represent soft Euro-skeptic ideals, restricting their support for the EU and EU integration as a whole, yet it does not look as threatening as it may seem, the party has strong support for economic ties with the Union. Seeing that, we can conclude that the presidential election results will not fully compromise Poland’s position in the EU.